The West: An online game

A little while ago I ran across an interesting text and image based online role playing game with an old American ‘wild west’ theme. I debated about whether or not to write about it here on History Rhymes as the game is unfortunately in German, but in the end, I decided to go ahead and write a blurb about it. 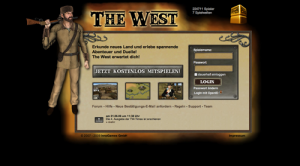 Although I haven’t really played it much due to a complete lack of time, it looks like quite a fun game. The idea is that you are new to the wild west and from there, you can be a wandering cowboy, a farmer, a shop keeper, bar tender, etc. You can found your own towns, engage in gun fights with other players, etc. I am not the type that usually enjoys role playing games, but I suppose you might say this game has a theme that hits home with one of my biggest interests. I am going to delve into it more as I go along.

I really wish I could find a game like it in English, but unfortunately have been unable to find anything even remotely similar. If I do run across something however, I will also post about it here.

You can find the game at http://www.the-west.de.

This entry was written by Alex Seifert, posted on June 8, 2009 at 3:52 pm, filed under 19th Century, 21st Century, American History, General and tagged Game, RPG. Bookmark the permalink. Follow any comments here with the RSS feed for this post. Post a comment or leave a trackback: Trackback URL.

The West: An online game (Update)
In my previous post about the online role playing game called “The West,” I stated that I hadn’t found an English version of it, but thanks to one of my readers, Jeff Smith, I now have a link to an English version for you. And here it is: http://www.the-west.net.

“Always drink upstream from the herd.” That was the advice of just one of hundreds of anonymous cowboys of the 19th century. While many of us are familiar with romanticized cowboys such as those played by John Wayne and Clint Eastwood in western films, many of us do not know much about the real cowboys, […]