While doing research for one of my projects about the Indian Wars, I ran into the letter that General Terry sent to Colonel Custer that ordered the Battle of the Little Bighorn, Custer’s famous last stand against the Indians. I’ve typed the letter up and have decided to post it here.

The Brigadier-General Commanding directs that, as soon as your regiment can be made ready for the march, you will proceed up the Rosebud in pursuit of the Indians whose trail was discovered by Major Reno a few days since. It is, of course impossible to give you any definite instructions in regard to this movement, and were it not impossible to do so the Department Commander places too much confidence in your zeal, energy, and ability to wish to impose upon you precise orders which might hamper your action when nearly in contact with the enemy. He will, however, indicate to you his own views of what your action should be, and he desires that you should conform to them unless you shall see sufficient reason for departing from them. He thinks that you should proceed up the Rosebud until you ascertain definitely the direction in which the trail above spoken leads. Should it be found (as appears almost certain that it will be found) to turn towards the Little Horn, he thinks that you should still proceed southward, perhaps as far as the headwaters of the Tongue, and then turn towards the Little Horn, feeling constantly, however, to your left, so as to preclude the escape of the Indians to the south or southeast by passing around to your flank. The column of General Gibbon is now in motion for the mouth of the Big Horn. As soon as it reaches that point will cross the Yellowstone and move up at least as far as the forks of the Big and Little Horns. Of course its future movements must be controlled by circumstances as they arise, but it is hoped that the Indians, if upon the Little Horn, may be so nearly enclosed by the two columns that their escape will be impossible.

The Department Commander desires that on your way up the Rosebud you should thoroughly examine the upper part of Tullock’s Creek, and that you should endeavor to send a scout through to Colonel Gibbon’s column with the information of the result of your examination. The lower part of this creek will be examined by a detachment from Colonel Gibbon’s command. The supply steamer will be pushed up the Big Horn as far as the forks if the river is navigable for that distance, and the Department Commander who will accompany the column of Colonel Gibbon, desires you to report to him there no later than the expiration of the time for which your troops are rationed, unless in the meantime you receive further orders. 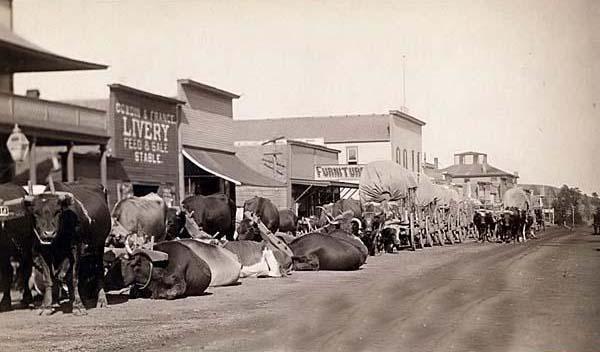 Life on the cattle trail in the late 19th century was often monotonous and boring, however, there were also times that were quite exciting and dangerous. Chief among the many dangers that the cowboys had to face on a regular basis were Indians, thieves and stampedes. Indian raids were certainly among the most prominent concerns…