Today marks the 146th anniversary of the signing of The Homestead Act. Like The General Mining Act of 1872, The Homestead Act of 1862 was designed to encourage people to settle the west. By the time the act was signed into law by President Abraham Lincoln on May 20, 1862, eleven southern states had already succeeded from the Union and almost a century of debate about how best to go about settling unsettled land in the west had already passed. The Homestead Act was a culmination of the triumphs and failures of the past one hundred years of experimentation.

Initially, the sale of public land in the west was seen as a source of revenue for the government rather than a means to expand the country’s borders and encourage settlement. The Land Ordinance of 1785 stated that an individual had the right to purchase 640 acres of public land for $1 per acre. In 1800, the amount of acreage was reduced to a maximum of 320 acres, however, prices changed very little at only $1.25 an acre. In 1854, legislation was passed that changed the prices of land based on its desirability. A plot of land that had been on the market for 30 years, for example, was reduced to 12.5 cents per acre. Even with that kind of price, most people could still not afford it, so settlement of western lands was slow.

In the early years of settlement in the west, it was assumed that settlers would pay for the land before settling it, however, in the mid-nineteenth century, legislation supporting “preemption” — or the right to settle land before paying for it — began to find support in the government. However, in 1852, 1854 and 1859, the House of Representatives passed the homestead legislation only for it to be defeated in the Senate. In 1860, a bill providing government land grants to western settlers was passed by Congress, but was vetoed by President James Buchanan. The chief concern preventing the legislation from passing was the issue of slavery. Southern states whose economies were supported by large slave-run farms were deeply concerned about the creation of small farms in the west and the spread of antislavery policies.

With the secession of the Southern states, The Homestead Act of 1862 had very little trouble finding support from Congress and from the president. With the new law in place, those willing to settle in the west and who had never borne arms against the US government were allotted 160-acre lots. To get the deed to their property, they had to follow a simple three-step procedure: filing an application (see image below), improving the land, then filing for deed of title. The only money they had to pay was a small application fee unless they chose to buy the property for $1.25 an acre from the government after six months of residency. In order to receive ownership of the land, settlers had to complete five years of continuous residency, build a dwelling of at least 12 x 14 and improve the land for agricultural use. The legislation did not specify in which measurement the 12 x 14 dwelling had to be. Many people took advantage of the this loophole and built dwellings of 12 inches by 14 inches in order to claim more land. After the Civil War, Union soldiers were allowed to subtract their time served from the requirements of the Homestead Act.

Although many of the pioneers who had ventured west could not endure the hardships of life on the frontier, many of them were able to stay. By 1900, 80 million acres of public land had been distributed as a result of the Homestead Act. By 1934, 1.6 million homestead applications had been processed and 270 million acres of land had been passed on to individuals. Congress repealed the Homestead Act in 1976 with the Federal Land Policy and Management Act in the lower 48 states, giving Alaska a ten-year extension. 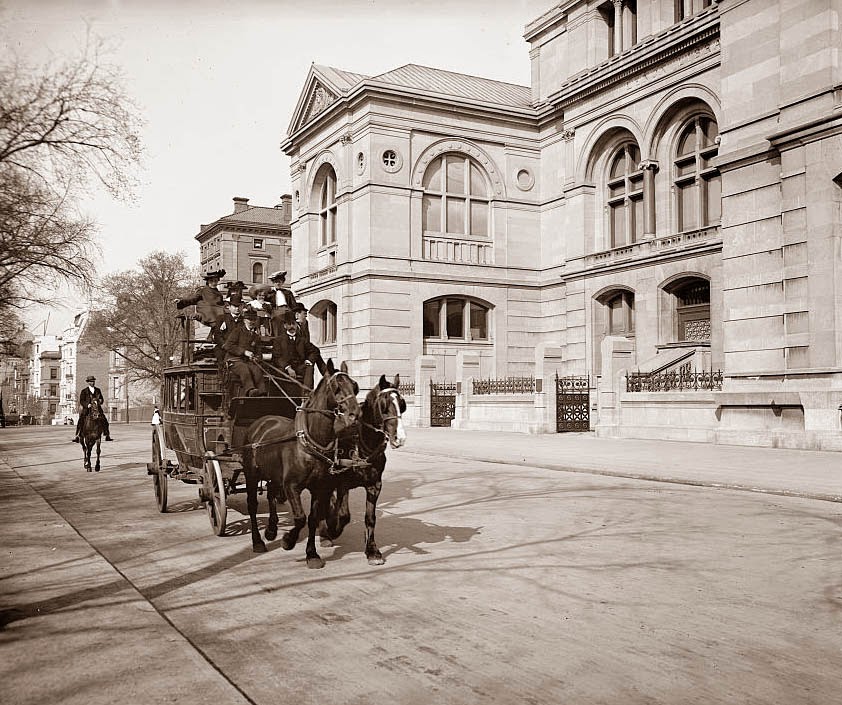 Quite some time ago, I did a research project about houses in Fin-de-Siècle Britain. This resulted in a long essay about middle-class houses during this time period which specifically focused on general tendencies in architecture, architectural features, façades, floor plans, as well as interior design.

It is really quite amazing to read through some of the theories produced during the 19th century about the origin of the Native Americans. As I talked about in my last post, I am currently reading the memoirs of George Custer about his life on the plains and his personal experiences with the Indians...
See all featured articles