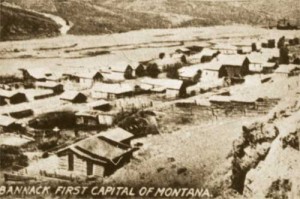 One of my biggest fascinations with the Old West is with what life in a Rocky Mountain mining town in nineteenth century would have been like. It would have been a life full of filth, rough characters and hard work combined with drinking, fighting and gambling as pastimes. Of course these are stereotypes of any old Wild West town, but were they really true? What was it that these brave, tough and rough souls did when they weren’t working in the mines?

These and other questions will be answered in a new series I am beginning here at History Rhymes. I will be exploring several different mining towns throughout the Rocky Mountains in the coming weeks. Some are still active towns, but many are nothing but ghost towns now. I will explore how people lived, what life was generally like in the towns and I will also give a brief history of how each town came to be and, in the case of some of them, came to pass.

I’ve recently been reading a German history magazine called Der Spiegel: Geschichte. The most current issue focuses on the Hohenzollern dynasty in Prussia and ultimately in the German Empire from 1871 until 1918. One of the last articles in the issue discusses the last German Kaiser, Wilhelm II, and his life after his abdication from […]