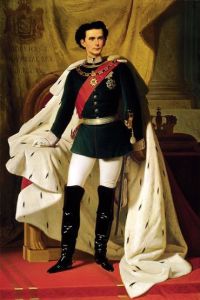 King Ludwig II was the fourth king of Bavaria. Of all Bavaria’s kings, Ludwig II is arguably the most famous. His legacy is entrenched in Bavaria’s collective memory as the Märchenkönig (Fairy Tale King) and his picturesque palaces and castles have changed the Bavarian landscape. Tourists visiting Bavaria will almost certainly hear about Ludwig II as he was responsible for building some of what would become the most popular tourist destinations in Germany such as the castle Neuschwanstein or Herrenchiemsee Palace.

Ludwig Otto Friedrich Wilhelm was born on August 25, 1845 at Nymphenburg Palace in Munich. He was originally going to be named Otto, but at the insistence of his grandfather, Ludwig I, his parents named him after his grandfather since they shared a birthday.

Unlike his father and grandfather he had little interest in academic and state affairs, but was an enormous patron of the arts, especially the operas of Richard Wagner. Much of his childhood was spent at Hohenschwangau Castle near Füssen in southern Bavaria whose interior is decorated with richly painted murals of famous old German sagas and myths such as Parzival and Nibelungen. Both of these became the basis for some of Richard Wagner’s operas whom Ludwig would later become close friends with and a patron of. The castle, built by his father, Maximilian II on the site of the ruins of an old medieval castle, sparked young Ludwig’s imagination and were the beginnings of the fantasy world he would later escape to as king.

Ludwig ascended the throne on March 10, 1864 at the age of eighteen upon the death of his father after a three-day illness. He was still quite young and unprepared for the office he had just inherited, but his popularity among the Bavarian people led to a smooth and steady transition. He initially kept his father’s ministers and continued his father’s policies only branching out after gaining some confidence in his own ability to serve as king. Even in his early reign, however, he was considered eccentric since he disliked public and social events. Ludwig thus tried to stay away from the Bavarian capital of Munich as much as possible and tried to avoid state events, including participation in the government. Despite this, however, he still remained popular among his subjects throughout much of his early reign. 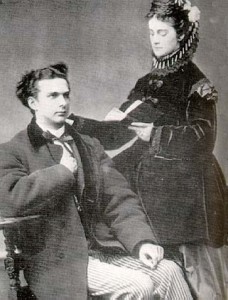 One of the first and most important tasks of any young monarch is to produce an heir. Although Ludwig ultimately failed in this regard, he had no exemption from the pressure to do so. In 1867, he became engaged to Duchess Sophie Charlotte in Bavaria. The engagement was announced on January 22, 1867, but was doomed to fail. Ludwig continually postponed the wedding date until he finally broke off his relationship entirely in October of that year. He never had another relationship nor any known mistresses. In fact, many of his private documents and letters point to homosexuality suppressed by his devotion to the Roman Catholic Church, but this theory is not proven. A few years after his engagement, a major turn of events would cause Ludwig to withdraw into his fantasy world.

1871 was not only a very eventful year for Ludwig II, but also for German history. The end of the Franco-Prussian War led to the unification of all of the German states under the leadership of the Prussian monarch, Wilhelm I, and the founding of the German Empire by Otto von Bismarck. Ludwig’s ministers were, however, able to secure a special status for Bavaria in the new imperial system meaning they were allowed to keep their own diplomatic corps and army. As with the kings and princes in other German states, Ludwig was able to retain his crown, but was nonetheless subjugated to the new German Emperor. This subjugation dealt a blow to his self-confidence and caused him to retreat into his fantasy world of knights and castles even further. Through financial incentives for Ludwig’s building projects, Otto von Bismarck was able to convince him to write a proclamation declaring Wilhelm I the new German Emperor — the so-called Kaiserbrief. After 1871, Ludwig was seen even less in public and eventually withdrew entirely, immersing himself fully in his building projects.

Ludwig is especially known for the palaces and castles he built throughout his reign. Linderhof Palace, Neuschwanstein Castle and Herrenchiemsee Palace are his most famous creations. Of all of these, only Linderhof was fully completed. His premature death and financial problems led to Neuschwanstein and Herrenchiemsee only being partially finished, despite the fact that Neuschwanstein would become Germany’s most famous castle and one of the most popular tourist attractions. He also had a few lesser known buildings erected such as the royal apartment in the Residenz Palace in Munich and the Winter Garden on the roof of the Residenz Palace. Other buildings were planned, but these plans were never actually executed, primarily due to financial problems. Two examples include a castle built on the ruins of Falkenstein Castle as well as an elaborate opera house on the banks of the Isar River in Munich. This obsession with building and living out his fantasies would be the downfall of Ludwig II. 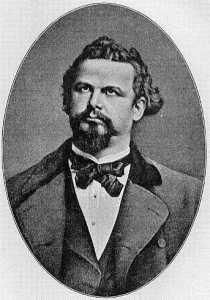 After several years of having entirely withdrawn into his building projects and fantasies, Ludwig’s image was tarnished beyond repair. He was entirely absent from government and from the public. Since the Bavarian king was still constitutionally the head of state and was required to sign all new laws, his absence and disinterest in politics caused major problems for the Bavarian government which was considerably weakened by his inaction. By 1885, he was also 14 million marks in debt and rather than cutting expenses, he continued to build and plan even more elaborate castles while demanding loans from other European monarchs. This caused further embarrassment to the Bavarian government. Eventually enough was enough and his ministers, led by Count von Holnstein, rebelled.

Between January and March, 1886, his ministers secretly put together a medical report by going through his files, his trashed documents, collecting testimony from his servants through bribery and other means, and by observing his behavior with the intention to declare him insane and unfit to rule. By July, the report was completed and signed by four psychiatrists led by Dr. Bernhard von Gudden, head of the Munich Asylum. None of them had examined Ludwig.

At 4 am on June 10, 1886, a government delegation which included von Holnstein and Dr. von Gudden arrived at Neuschwanstein Castle. They intended to serve Ludwig with the document of deposition and take him into custody, but having already received a warning about the delegation, Ludwig had the local police arrest them and they were held captive for several hours. The police formed a guard around the castle, preventing the delegation from reaching the king. The servants still faithful to him urged him to flee or show himself in Munich, but he hesitated too long which allowed the government to disperse any supporters he had and drive away the local police force protecting him. Meanwhile his uncle, Prince Luitpold, was proclaimed prince regent.

On June 12, 1886, Ludwig was woken up in his bedroom in Neuschwanstein Castle by a second delegation that was able to finally seize him and force him into a waiting carriage. They hurried to Berg Castle on Lake Starnberg (south of Munich) where he was held prisoner. His captivity did not last long, however. The next day, June 13, 1886 at around 6 pm, he went for a walk with Dr. von Gudden on the grounds of the castle along the shore of Lake Starnberg. They were last seen around 6:30 pm. Three hours later, their bodies were found in the lake. Ludwig’s watch was stopped at 6:54.

No one really knows exactly what the circumstances around Ludwig’s death were. He had always wanted to leave a mysterious legacy and he successfully accomplished that. Since it is well-known that Ludwig was a capable swimmer and that the water where the bodies were found was only waist-deep, there have been many theories as to assassination or murder, but the truth of the matter may never be known. Other theories include government conspiracies to not only depose, but also dispose of Ludwig, or even of Prussian involvement to weaken Bavaria’s influence within the German Empire. Nothing is proven though.

Upon his death, his younger brother, Otto, was proclaimed king, but having already been declared insane, their uncle, Prince Luitpold, continued to serve as prince regent.

Ludwig’s legacy is one made of mystery as well as brick and mortar. His mysterious death has captivated the imaginations of many generations of Bavarians and of many millions of tourists. Whether Ludwig was actually insane or not remains a hot topic of debate even today. The castles and palaces he built are a reminder of his influence on Bavaria, Germany, and even the world. Neuschwanstein would become the idealistic fairy tale castle and even serve as the prototype for Walt Disney’s famous castle. Prince Luitpold’s son, Ludwig III, would eventually give Ludwig II’s castles and palaces to the Bavarian state. These continue to attract large number of tourists every year and, although they were partially responsible for Ludwig’s downfall and financial ruin, have ironically become a large source of income for the Bavarian government today. 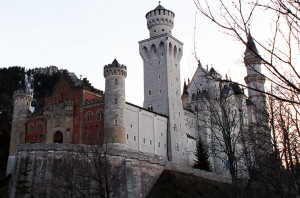 This entry was written by Alex Seifert, posted on December 27, 2015 at 8:52 pm, filed under 19th Century, Bavarian History, Biographies, Featured, German History, Kings of Bavaria, Multi-Part Series, Royalty and Aristocracy and tagged Ludwig II. Bookmark the permalink. Follow any comments here with the RSS feed for this post. Post a comment or leave a trackback: Trackback URL.

New Homepage and Updated Design
I am pleased to announce a few changes that have been going on here at History Rhymes. The homepage has been reworked to emphasize feature articles and news articles, the whole website is now responsive for mobile devices and tablets, and a few other more minor updates round the whole thing off.

The year is 1887. Winter is beginning to grip its icy grip on the small mountain town of Glenwood Springs, Colorado. You’ve just arrived after a long journey by horse from Denver. Running inside from the chilly November air outside, you seek warmth in the lobby of the fashionable Hotel Glenwood where you engage a […]