Life on the cattle trail in the late 19th century was often monotonous and boring, however, there were also times that were quite exciting and dangerous. Chief among the many dangers that the cowboys had to face on a regular basis were Indians, thieves and stampedes.

Indian raids were certainly among the most prominent concerns of the 19th century cowboy. The image portrayed to us by fictional westerns of Indians swooping down from nearby mesas and hill-tops, killing everyone in their path is only partially true in terms of devastation, although it was usually far less dramatic than portrayed by the movies. Some trails, such as the Chisholm trail, that ran from Texas to Kansas followed a route through Indian Territory, or the modern day Oklahoma. Cowboys who drove their cattle down these trails ran the great risk of Indian attack. Rather than always brutally attack the driving parties, Indians would also take to other tactics to try to dissuade cowboys from driving their cattle through their territory. Often times the Indians were the cause behind other such trail calamities such as stealing cattle or even worse: causing a stampede.

Of course the Indians were not the only cattle thieves on the trail. White, black and Mexican bandits were also responsible for cyphering cattle from herds being driven on any trail. Theft of cattle indeed was such a problem that the practice of branding the cattle became commonplace amongst cowboys and ranchers alike. The symbol branded on the cattle varied based on which ranch the cattle came from.

Designs for symbols ranged from elegant to very simple — often times just the initials of the owner of the ranch the cattle were originally from. Branding the cattle also made it far easier to recover cattle who sometimes ran great distances during a stampede by allowing the cowboys to distinguish them from either wild cattle or another rancher’s cattle in the event that they should mix with other cattle.

Stampedes were another major concern of the cowboys. During a stampede, the cattle would run en masse, which not only made them difficult to round up again after the stampede had ended, but also presented a grave danger to the personal safety of the cowboys themselves. A stampede could easily be triggered by even the slightest thing. A single cow could step on a twig causing it to snap, the cow would panic and run, not knowing what made the noise. The other cows would quickly follow suit, assuming that if that cow had been frightened by something, they do not want to deal with it. A cowboy in the way of a stampeding herd was in terrible danger as the panicked herd would not stop or even bother to go around the cowboy — even if the cowboy was mounted on his horse. If all was well and no one had been maimed or killed by the stampede, the cowboys would then have to round up all of the cattle which could take several days.

As full of danger and excitement as the cattle drive might have been, it was indeed a short-lived phenomenon. By the 1890’s — only about 30 years after the first large drives began — most of the open range had all but disappeared and the cattle drive was suffocated by the quickly encroaching ranches. Ranchers began using barbed wire to mark their property and to prevent large herds from being driven through them. Another chapter of American history had closed. 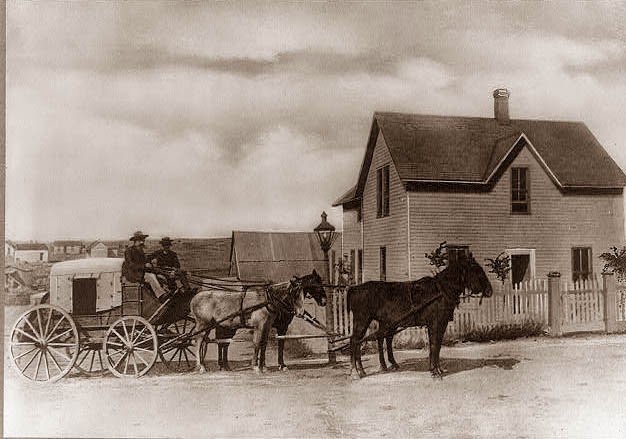